January 2018. Now's the perfect time to revive the original line up of 1985 as bassplayer Anders Nordstrand and drummer Kent Sjoholm returns! Concerts in Norway and a 2nd joint evening of POWER POP EXTRAVAGANZA with The Yum Yums and Sonic Surf City takes place. The band sounds better than ever and now lso includes Gunnar Frick from the original line up. A new album is recorded and mixed once again by Christian Jacobsen named "21" due to being the 21st album Jorgen has released self penned and also as a wink to the band "growing up". The album get's overwhelming respons with critics and fans.

The bands 35th anniversary is coming up in 2020 and big plans are made, and then - Corona virus puts all on hold... But instead of dragging their feet the band records a new album called "Forever And Never" (blue vinyl) along with a re-release of their 1994 album "Bamboozle!" (red vinyl), a remix of their 1997 album "Stereoids Revisited" (green vinyl). The band also releases a limited cassette (!!!) called "Retro" - 14 songs of garagerock recorded in 2012 and been laying in a drawer. The year 2021 started out with a split album called "Scandinavian Flavor" with Psychotic Youth and Tommy & the Rockets where the bands do their favourite covers on each side. Good reviews all over. So despite Corona the band keeps pushing on and next release are a 4-track EP called ABBA - yeah, psychotizied ABBA songs! On the same release date you will also find a 5-track vinyl EP with the demos from the 1991 album "Be In The Sun". The EP is called "The Bellevue Tapes". To be continued... 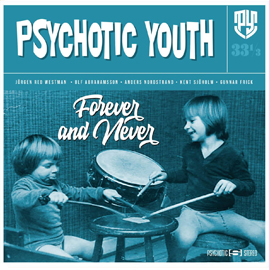 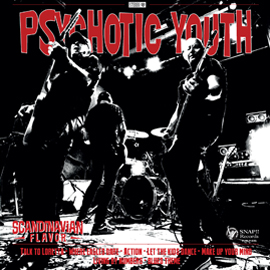 Psychotic Youth live in Gothenburg May 2018

Psychotic Youth live in Malmoe May 2018